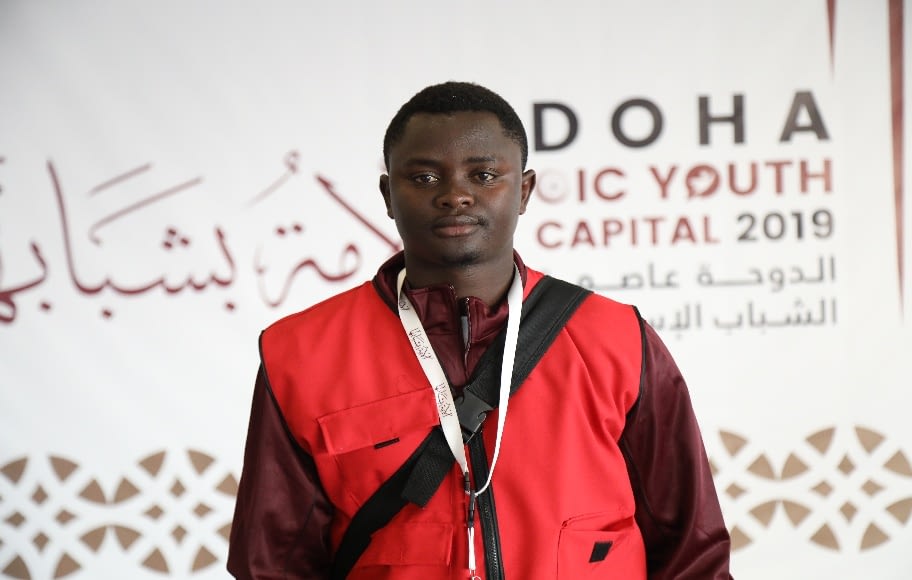 The Doha youth camp for voluntary and humanitarian work is an international exchange programme organized in collaboration with Islamic Cooperation Youth Forum as part of Doha – OIC youth Capital 2019 activities, under the motto “The Youth is the Power of the Nation”. It aims at developing the capacities of Muslim youth in the fields of relief and disaster management, supervised by the Ministry of culture and sport of Qatar. It is an opportunity for Muslim youth to exchange experiences in the field of volunteerism and humanitarian work with an aim to develop their capacity in fields of relief and disaster management.

Piloted by Mohammed Ali Al Ghamdi, the camp supervisor and assistant to Qatar Charity’s CEO, the programme hosted 53 outstanding leaders out of the 7000 that applied from more than 53 Muslim countries.

Out of merit, Tsague Dongfack Willy Endelson, Project Assistant of Parade Cameroon, President of the Cameroon office of the International Network for the Promotion of Speech Arts in Africa, Caribbean and Pacific, and the Director of Programmes of the Cameroon Debate Association (CDA) was one of these 53 leaders, thus, representing Cameroon to the Doha Youths Camp for Humanitarian affairs and volunteerism. Organized by the minister of Culture and Sport, State of Qatar with other partners, notably, OIC Youth Forum, Qatar Cultural and Heritage Center and Islamic Cooperation Youth Forum, the camp lasted for 10 days that is from the 27th October – 6th November 2019.

Upon the arrival of the participants from the 53 countries on the 25th day of October 2019, they were immediately driven to the five stars Millennium Hotel, in the Capital city of Qatar, Doha for accommodation. In the early morning of the next day, the organization committee made the program known to the participants, and indicated that by 8am, everyone had to be ready for the Camp in order to start unfolding the camp’s agenda.

Everything started with an opening ceremony, within which the organization committee officially welcomed the participants in the camp, clearly spelled out the objectives and the programme while outlining some tips that needed to be considered by the participants for a serene stay and a good flow of the trainings. Afterwards, the organizers had a turn in the camp with participants as to present the different tenths, especially the girls and boys dormitories, workshops, media, evaluation and supervision. The ground was set for activities to start, so participants were split into two main groups, namely, A and B, having each a leader and an assistant.  For this 26th day of October 2019, four capacity building workshops took place, namely, “The world refugees and displaced crisis, needs and responses”, “Social media platforms: Role and Impact on developmental humanitarian works”, “Creativity, development and leadership session”, “Planning and implementation of voluntary initiatives”. As the programme entails, activities ended at 10pm and everyone went to catch some sleep.

In connect with the program, the next day, at 6am specifically, both groups went to Ras Laffan Emergency and Safety College for a capacity building workshop on “Fire Fighting”. After this interesting section, by 1pm, the team returned to the camp for other Workshops on “International Humanitarian Work” and “History of International Humanitarian Work in Islamic Civilization” proposed by experts from the Qatar Institute. That was all for the second day. On the third day, activities started at 7am with a practical section of the “Firefighting workshop” we had the previous day at Ras Laffan. Afterwards, we returned to the camp to proceed with the programme. Two workshops was proposed on board, firstly, “International Humanitarian law System”, and secondly, “Preserving the environment, reducing Squandering of Blessings and overcoming its manifestations + Practical Workshops on Recycling.” The next day, the team went to the Permanent Committee for Emergency and more discoveries. Later in the day, we had another two workshops on: “Briefing on Sphere Project and Minimum Standards for Humanitarian Response” and “Basics of Communication in Sign Language.” The programme remained the same, the following day. That is, going to the Permanent Committee of Emergency and returning to the camp for two workshops, one on “Introducing Sustainable Development Goals 2030” and another on “Astrology”.

The sixth day opened with a workshop on “introducing International Humanitarian System”, proceeded by two others on “Consolidating Moral Values and refinement of self-skills” and skills of “dealing with the media”. The day ended with a voluntary activity in planting trees. On the seventh day, rehearsal of a scenario for the closing ceremony kick-started, proposed by the organization committee and amended throughout the rehearsals by the participants. Later in the day, the team had a workshop on “Ethics of Humanitarian and Development Documentation”, and a meeting with social media celebrities in Qatar for a share of experience. The team resumed activities the subsequent day with the rehearsals of the closing ceremony scenario, and later went to clean the beaches in the evening. It was left two days to the end of event. On Monday, 4th of November 2019, we entered the 9th day of the camp’s schedule. Early as 6:30 am, everyone was up to proceed with the programme. Suddenly after the morning evaluation, the team drove to the training ground for preparations of the scenario against the closing ceremony.  Once back to the camp, the participants were given the leeway to do some personal presentations. Within this scope, the representative of Cameroon proposed a workshop on Speech Arts, which really impressed everyone. Besides, he did unveil keenly Cameroon in all its diversity and the updates of the country. However, it was curious that many had no knowledge of Cameroon, until the presentation. The exchanges amongst the participants unfolded smoothly as those who had something to share, staged the floor to enlighten their mates. After two hours of exchanges, the organizing committee zoomed in for the next activity on the programme. A meeting with Doha’s media celebrities for an interview on her professional career and her experience as a volunteer. Late in the evening, all the participant went on a touristic trip to the beach. That marks the end of the 9th day.

In the early morning of the last day of the Doha youths Camp, 6:30am specifically, the organizing committee accompanied the team to the ground where the scenario was to be implemented. Giving that the groundwork had been staged the previous day, every participant simply respected the role he was attributed. As the minister of Culture and Sport of Qatar, the main guess, flied into the stadium, the scenario kick-started. In less than 7 minutes, the scenario on an emergency team cover after an Earthquake in a football field during a football encounter was presented. Suddenly after the scenario, the minister approached the participants and organization committee for a family picture before taking his leave. That was all for the event and participant was called upon to return to the camp in order to prepare for visit to the National Museum of Qatar. From 6pm to 8pm, was the closing ceremony, speeches from the participants, organizing committee, partners and government, and awards certificates of participation to the different workshops. Everything ended with a family picture to immortalize the event.

It is however worth mentioning that the participants and facilitators were evaluated every day as per their duties in the camp. During the three last sessions, medals were awarded to the best participants, and in the list Cameroon came out best of group A.