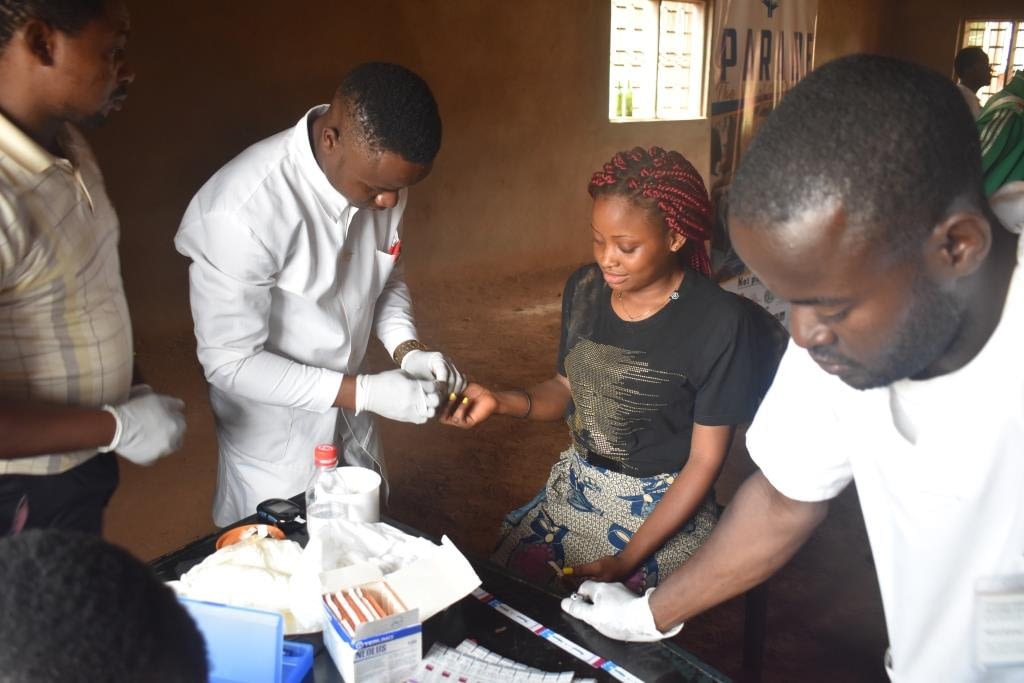 No one has ever lost putting a smile on someone’s face. It is however true that someone can’t help everybody, but at least, everybody can assist someone. It is in this regards that the Cameroon Debate Association (CDA) in consortium with the Catholic Medical Health Center of Batsengla under the framework of the programme entitled the Gifts of Hope to the Internally Displaced persons, conducted, this Friday, 13rd March 2020, a distribution of food (3 bags of rice, 3 cartons of Elena Tomatoes, 2 cartons of soaps, 1 carton of cube, 2 bags of salt, 1,5 carton of tomatoes) and non-food items (dresses and Matrass, shoes and medical tests) to over seventy-five (75) households in the quarter Tsimbing, Foto-Dschang, to an estimation of roughly 450 IDPs.

A Couple of weeks ago, the Cameroon Debate Association’s identification team went door to door and registered the IDPs, therefore, bringing them to clarify their urgent and accessories needs. This went a long way to help our donors to react accordingly. Pertaining to the needs raised, 280.050 FCFA has been raised by the actors for this second distribution, knowing quite well that the first distribution held in Tchuale two months ago, cost 100.000. So, it is obvious that this second step’s budget was 180.050 over the previous.

At 2:30 pm already, the staff of the CDA and the president of the youth movement of Tsimbing, representative of the Chief, had mounted up the stage for the programme to start, in the midst of 75 families, representing over 450 internally displaced persons of the quarter of Tsimbing, Dschang. At 3Pm, the Medical heath center Batsengla entered with their equipment for the diabetes and HIV/AIDS tests.

The project assistant, Tsague Dongfack Willy Endelson, addressed a word of welcome to the IDPs, afterwards, followed the chief representative; the project manager, Binyou Bi-Homb Marius Yannick; the Director of the Medical Health Center; and lastly the IDPs leaders of Tsimbing. This speeches proceeded with a good music proposed by Asa’a Telong and two internally displaced persons. Immediately after the first song, 42 Idps amongst those present arranged themselves in lines for the tests, while at the other angle of the hall, the CDA team were proceeding with the identification of new beneficiaries.

At this juncture, the packages were being assembled by both staffs of the CDA and the Catholic Medical Center of Batsengla. It didn’t take enough time for the registered IDPs to have their tests and collect their packages. We could see joy invading the hall through thank giving songs, dances and exclamations expressed by the IDPs to both organizations involved in this initiative. Lastly, all were tested negative of HIV/AIDS and Diabetes.

The day ended with a sensitization talk on positive health by the doctors in charge of tests with the IDPs and a family picture to immobilize the event. We don’t intend to stop if we don’t see a change in the living conditions of the IDPs in Dschang and Cameroon in general. And since the situation is yet alarming, we have set our next distribution for the month of May, 2020 at Foreke.